What a Dream Revealed

Earlier this week I woke up with a dream that I'd had at the forefront of my mind.  For whatever reason, I was dreaming that I had looked at newspaper articles on the Fleckman family in Texas and found some great information.  I have heard stories from other genealogists about cases of genealogical serendipity, but had not really experienced it myself.  Usually it is a tale of wandering a cemetery looking for a particular headstone for hours and then as they give up and give it one last look and there it is!  Whether it is “dumb luck” or our ancestors nudging us in the right direction- who knows.  Either way, it’s amazing to experience.
Before I started searching I decided to reread a bit of the biography my maternal grandmother had written about the Fleckman family.


My knowledge of the ancestors starts only with my grandparents on my Mother's side, and that is more or less from surmises, calculations, and memories. As well as I can deduce, my great-grandmother on my grandmother's side had been married twice. Grandmother, Dora Fleckman Engle, was born in 1864 in Austria-Hungary probably in the same city as that of my grandfather, Samuel Hirsch Engel, born in 1861. Dora Fleckman must have had two brothers, Philip Sonefeld (changed to Sunfield) and a Fleckman brother. Daughter of Philip Sunfield was Blanche Sunfield Bernstein, who had two daughters, Helen and Amy. The Fleckman brother had grandchildren whom we met Herman, Isadore, and Jeanie when they visited. There are still Fleckmans in New Orleans who had come from Beaumont, Texas. I do not know if Grandpa Engel had any sisters or brothers.

With this in mind, I decided that I'd better hop on GenealogyBank and take a peak at what I could find.  I had hoped for maybe an obituary that would have some information about the Fleckman family and some of the contributions they may have made.  What a surprise this headline about  Adolph Fleckman….

I was shocked to learn that Adolph had lost his grasp on his life and had tried to hurt himself.  His family was keeping sharp objects away from him and trying to maintain the family’s paint and wallpaper business while keeping him confined in the home.  What a frightening experience for his family!

There were a number of additional articles in the newspapers of Beaumont, Texas including these. 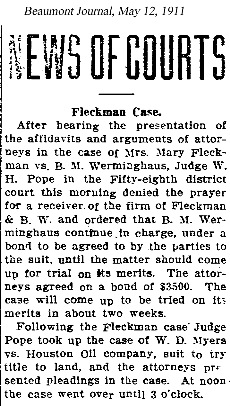 Apparently this had occurred just a day before Adolph had tried to commit suicide.  Part of me wonders if he “lost his mind” or had inhaled too many paint fumes.  Impossible to know, but definitely interesting to ponder. 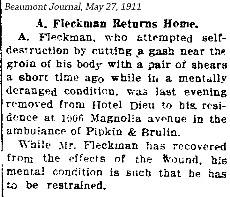 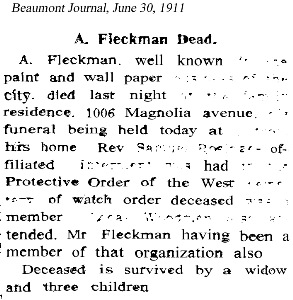 Unfortunately, Adolph’s story is not a happy ending.

This scan of the paper is not the greatest quality, but from what I was able to piece together from it the funeral was held at his home. I can only imagine how his widow and children dealt with this sad turn of events.  Perhaps I will track down more news of this family with time.   I had no clue that this search would reveal such a shocking story in my family history.  And to think if I had not had that dream, I would never have known about this.


Technorati Tags: Newspaper,Beaumont,Texas,Fleckman
Posted by Jen A at 9:11 PM

Jennifer, this gives me the chills. To think that you found this because of a dream is amazing. And then the shock and sadness of finding the cause of Adolph's death. I'm so sorry. One of my great-great-grandfathers committed suicide. It was an awful thing to learn, as I'm sure this is for you too. I can only feel sadness for our grandfathers and for their families. Blessings to you.

Wow, that's incredibly sad. What struck me as how the papers followed this poor man's downfall to the "nth" degree. When I worked in TV news, the edict in the newsroom was "we don't cover suicides" - unless, of course, a public figure is involved. I think most newspapers operate on this principle, also. Obviously, papers - at least this one - did not adhere to this "back in the day"!

I haven't experienced genealogical serendipity myself, but it's neat to read about your experience! Thanks for sharing this story, sad though it is.

Thanks for all the comments. It is sad that the family had to have this all dragged out through the papers. I can only hope that the children were not affected too deeply. Let's hope I find some happy news for this line of cousins!

Jennifer, it IS sad that the newspapers published so much detail but I think it's typical of the time period. I have several ancestors who died horrible deaths and the newspapers went into great detail about what happened. Sometimes I wonder if, because they didn't have TV, they published the gruesome stuff in the newspapers. I don't know why but it IS sad. There HAS to be better news for this line of cousins, doesn't here?! 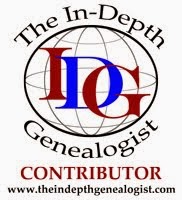